Design a site like this with WordPress.com
Get started
December 20, 2017January 2, 2020 Darrin Lee 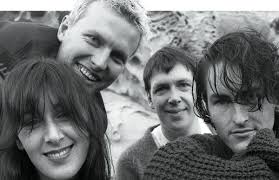 I was recently excited to see various blogs waxing lyrical over the announcement of a Falling Joy reunion that ultimately saw them supporting fellow ‘Triple J’ scenesters, The Clouds on their own reunion tour.

In my early 90’s university days, these were ‘the’ band whose cassette you would casually leave on your desk in order that fellow indie scenesters would see that you were championing the cause of the Australian / New Zealand jangle inflected bands that were just ‘so very cool’ at the time.

Falling Joys were the band that we expected would reach the greatest heights and allow us to slap each others backs so that our 90’s floppy fringes would flutter dramatically to herald the part we had played in their stardom…Unfortunately, this did not happen primarily due to the sophomore album (Psychohum) drifting down the shoegaze route causing thousands of floppy haired slightly post prepubescents to mourn the loss of their sound.

The debut album Wish List was the sound we wanted. Suzie Higgs’ gorgeous, breathless, Susannah Hoffs style vocals, married to male harmonies provided by bassist Pat Hayes, were welded either to chunky bass rhythms in tracks such as Shot In Europe, Lost Addiction or the superbly/atypically dark Tunnel Vision or to angular jangling guitars that carried the sound off in an altogether more charming direction.

Obviously this committed ‘jangle-head’ loves tracks such as the luscious single Lock-It, Jennifer (see above) and probably the best track on the album You’re in a Mess (see below), however for those that like their jangle-pop served up by late 80’s / early 90’s Aussies, there are at least 6 tracks on this album that compare admirably to anything from that scene.

There have been three February 2018 dates added to their tour with The Clouds due to the overwhelming success of the original tour, so if you are Australian based get there !