I remember a wise man, one simply too brilliant for name recollection, penning ‘that if all the praise about R.E.M were true, they would be Miracle Legion‘.

Indeed the finest Connecticut offered, was the band ‘that mate’, who just had to be different to everyone else (just out of sheer cussedness and a need to exercise their self-proclaimed heightened sense of individuality) used to proclaim preference for from the US College Rock scene.

Such au contraire types were desperate to differentiate between the two bands, usually dismissing R.E.M as too commercial in the absence of any other definitive explanation.

In fact the opposite was true. Miracle Legion released this EP, then sauntered off touring in the UK signing for Rough Trade while R.E.M remained with the relatively small I.R.S label in a bid to retain artistic control.

However, that really is the only fundamental difference. Miracle Legion have the same liquid chord structures as R.E.M and Mark Mulcahy had amazingly similar vocal stylistics, albeit a tad deeper than Stipes allowing him to handle the moody Everybody Hurts type tracks that both bands were capable of producing. However the difference was essentially very subtle. 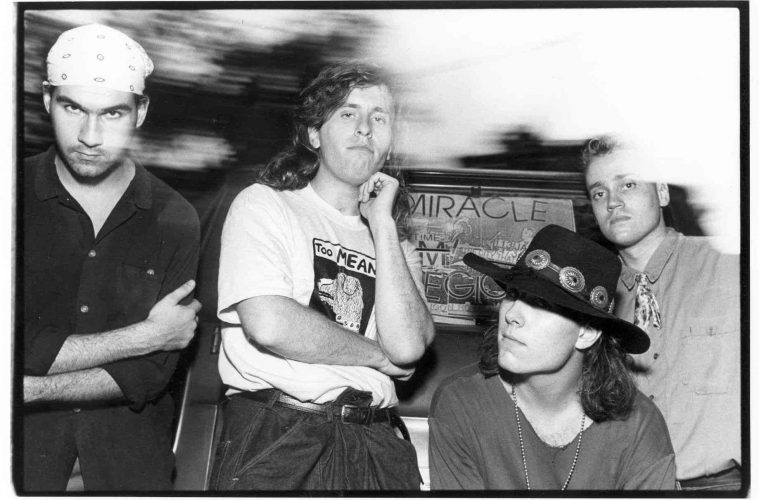 However it is difficult to be critical of such similarities. Initially the college rock sound of the era had ‘that sound’. Admittedly some played it better than others, but there was still a definitive sonic uniformity shared between many bands of the scene. Similarly criticism is also avoided inasmuch that R.E.M released just one EP prior to the Miracle Legion formation which was the altogether more post-punk oriented Chronic Town…Therefore and I pose this question extremely quietly around the temples of jangle-pop worship, could it be that Stipe et al had their Murmur and beyond style garnered to some extent by a Miracle Legion influence?

Before I start dodging the bullets, my defence is strengthened by general irrelevance. Whether this EP does stick too rigidly to a R.E.M template or not is a moot point as, essentially, it is truly superb.The title track (see below) is arguably ML’s best as much because of the typically obtuse lyrical nature as anything else, that have caused ruminations about whether it is just an ode to either Mulcahys mother/father, losing his virginity to an older woman or something more sexually sinister, perhaps pertaining to abuse by the ‘loudest voice’. The tracks lyrical ambiguity accentuates its musical jangle strength.

In fact this may be the most significant difference between ML and R.E.M inasmuch that Mark Mulcahy penned lyrics on this EP which on the surface appear to be lovely tracks about the coziness of middle class non-existence. These are accentuated by the jangle-pop beauty present in all of the tracks, especially Closer to the Wall (see below) and Just Say Hello. In comparison their contemporaries from Athens had a more immediate edge and often politicized spike to the lyrics of their early work which were far less subtle and ultimately less open to listener interpretation.

Closer to the Wall

In my opinion, this was the best release by the Miracle Legion. After this they toured extensively in the UK, had personal differences and ultimately personnel changes before signing for UK label, Rough Trade. As such it took them three years to release the 1987 debut album Surprise Surprise Surprise by which time they had slowed their sound down just enough to make it a relevant, but not essential purchase.

The Backyard EP in comparison, along with his late 90’s Polaris work, is undoubtedly Mulcahy’s best jangle-pop work and totally essential.