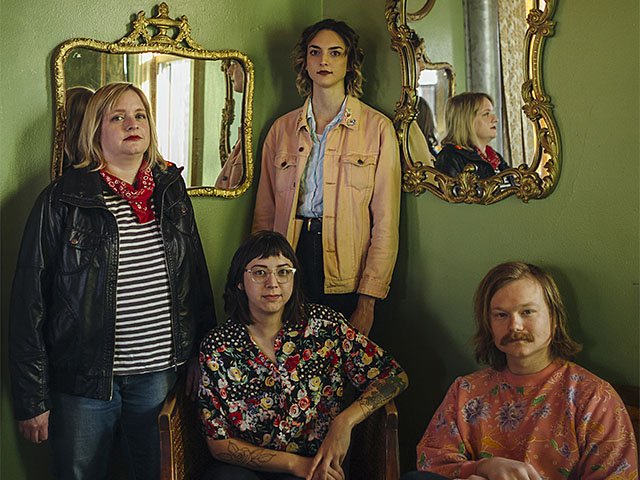 After their critically acclaimed cassette label debut (Karen is Sharon out of  band member Claire Nielson’s prolific Rare Plant label) and their ever increasing gig support, Madison, Wisconsin four piece Proud Parents were picked up by the long standing Dirtnap Records label.
The band fit perfectly into the Dirtnap Records aesthetic with the sort of ramshackle, occasionally deranged garage pop that sees them sit extremely comfortably with label mates such as Patsy’s Rats, Mind Spiders and especially Dusk.
However Proud Parents provide extra nuances to the label’s garage-pop/punk coverage. Initially this band, in their more controlled and melodically vibrant tracks such as Hypnotoad, the superlative 2 Fast 2 Furious (see below) and Baby, provide an intriguingly squelchy jangle-pop, that sees the high end guitars notes procrastinate for just that split section, so that they threaten, but ultimately fail, to dominate their determinedly ramshackle garage-pop essence. It is a fight between two musical styles that never threatens a winner, but you really would not want it to.

The second added nuance provided is a sense of glorious immaturity. With Proud Parents this is not the sort of immaturity that is often reflected in the lyrics (and dance moves) of whatever the latest boy-band is, but the more essential sort that enables music to passionately hold on to a sense of fun or at the very least recognize the fact that not taking yourself too seriously has an infinite appeal.

This band perfect this appeal superbly in tracks such as T Street Shuffle, Dead Wrong and the album’s true stand out Flavordust. Such tracks juxtapose the bratty, immature, boisterous and sometimes unhinged appeal of garage-poppers of yesteryear such as The Muffs and The Donnas, to the perfectly contrived disjointed imperfections of Violent Femmes, whilst always just about managing to keep the sound within the extended confines of all things garage-pop.

Proud Parents may not ever be stadium fillers and I get the feeling they probably do not want to be…however they are more than capable of providing a thrill-a-minute as they work hard to avoid it!
Artist Links
Discogs
Label Links