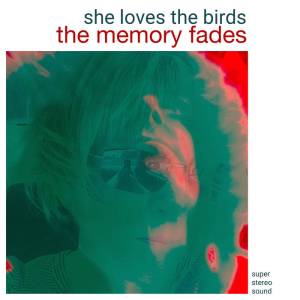 Sometimes you can almost buy a release without ever pre-hearing the music, as everything surrounding it just oozes a level of pedigree that goes beyond mere ‘potential’. She Loves the Birds certainly falls into such a category.

Initially, if you are reading this blog then a) you have already identified yourself as absolute paragons of musical taste and b) this will transmute to you already knowing that The Memory Fades is the latest band of Stephen Maughan, front man of Kosmonaut who split up a year ago. Immediate pedigree right there.

If that is not enough to get your mouse hovering over the buy button at Bandcamp then perhaps the fact the newly reformed Sunday Records label have picked them up, along with the likes of Bulldozer Crash and L I P S as the pioneers of their label resurrection, might just give you added assurances.

After three paragraphs of gushing praise, based purely on what is essentially all things ‘perhaps’, the first listen of this four track brilliance justifies my ‘gush’. Initially the opening two track salvo, She Loves The Birds (see below) and Picture Of You immediately shows an essence of Kosmonaut with the muted, muffled early Teenage Fanclub stylistics ensuring the easy transfer of fan bases.

It’s is not just the re-invigoration of Kosmonaut though (and even if it was who would care). There is certainly an extra sense of melody to tracks such as Am I Losing You and lead single Mining for Diamonds (see below), that are accompanied by a decreased sense of clarity, that makes this ifferent. Essentially such tracks move slightly along an inconceivably modern indie-folk spectrum.

Wherever Stephen Maugham goes musically I will never be too far behind…nor should you !