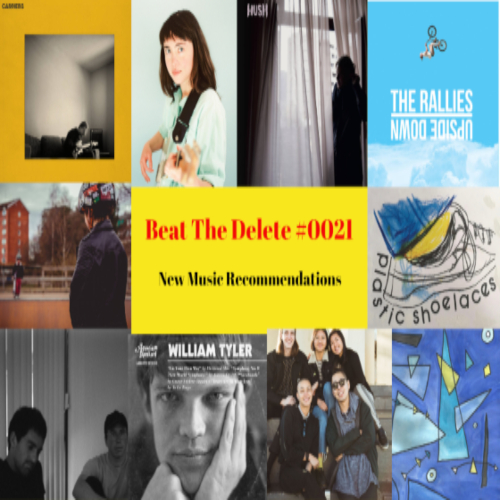 New music submissions (‘new’ classes as less than a month from release) arrive at JPH from all sources, including band members, promo companies and the various follow buttons that I have clicked over the years at the various streaming sites etc…the following are among my  favourites that have  ‘beat the delete’ button in the last week.

Track:  I’m Only Taking What Is Mine From: Hush  Label:  Taxi Gauche Records (UK/EUR) and First and Foremost (US) Release date: 30 August 2019

It has been nearly two years since No Vacation’s brilliant ‘Intermission’ EP was released. However, they have been back in the studio of late releasing a covers album of The Cranberries’ “Everybody Else Is Doing It, So Why Can’t We?” as part of the critically acclaimed Turntable Kitchen series and are working on their next EP that this flyer single is from…You can never really get enough No Vacation so lets hope their recent studio releases continue.

Indiana’s finest lo-fi janglers just become stronger / more developed with every release. If this flyer single is an indication of quality my pre-order is well justified!

Track:  Cobweb From: The Middle of Nowhere  Label:  Self released Release date: 30 August 2019

2nd band from LA. Ruby Haunt create beautiful jangled atmosperics out nothing more than isolated riffs, distant fuzz and total escapism. This album is one of those for that deserves headphones/darkness/relaxation.

The press release for this track/album describes The Needs as Norway’s new ‘power-pop bands champions’…as there are not too many bands doing this kind of jangly power-pop well these days, perhaps we should extend their self imposed geopgraphical parameters?

Just like rubbish British unelected British Prime Minsters…one decent jangly power-pop band surfaces (see The Needs above) and then another. 70s inflected pop rock jangle is in the safest of hands.

Janglepophub placed this Kansas City’s Mama Pancake album in the top 15 albums for 2018…finally it appears that someone has listened and they have been signed by a Jigsaw Records label that offers them a natural home…cannot wait for this release.

Ex member of Silver Jews and Lambchop has long been concentrating on his instrumental solo project. With incredible artistry he is even able to make this Fleetwood Mac track bloom.

With one foot in 90’s alt.indie like Pavement and another in 2000’s Hefner-isms, Jason Dezember et al are a ray of difference in the current retro Sarah doninated indie-pop landscape.

2nd single from the soon to be released Dream Noise album. Meritorio Records are generally famed for selecting bands purveying crisp, crystalline jangle. This time they have chosen a badn who appear intent on challenging The BV’s for the best of jangle-gaze moniker.

Track:  Painted Smile From:  Goofball Label:  Self Released Release date:  Single out now / Album out – to be announced

Please support all of the artists listed who you like with any spare fiscal means possible and/or publicity on your social media sites…it is the best way to keep their sound in your ears!