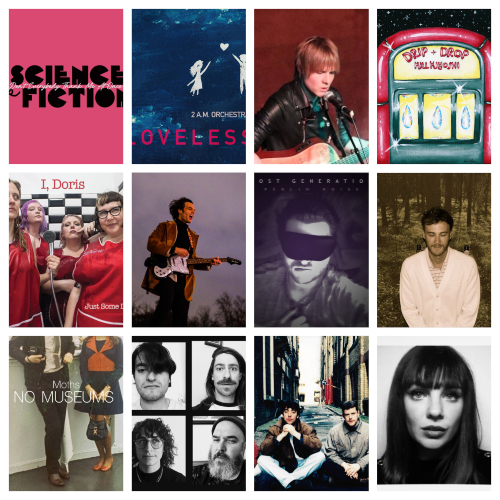 Many thanks to the acts below for the following brilliant tracks….As we eneter the new year, just a little reminder to try and support these acts and indeed any of your favourite artists with monetary purchases of their sounds/merchandise and/or giving them as much love of social media as possible…lets keep indie acts around for our listening pleasure for as long as possible!

Chicago based act provide beautiful jangly, dreamy, shoegaze you could dance to if your gaze sensibilities were not preventing it. This EP / act is one of the finds of 2019 for me.

Track:  These Days Are Ours From: The Patron Saint of Heartache (album) Label:  ? Out: Album out February 2020

Candy Opera are back with more of the best jangly Sophisti-pop you should have been hearing for the last 35 years! The good news is that this is from their first album of new material  since the early 80’s, due out in February !!!

The Reds, Pinks and Purples

This is the third EP Glenn Donaldson’s latest project have released since the sublime ‘Anxiety Art’ album in September 2019 (Pretty Olivia Records). Each of them has been nothing short of essential.

Track:  The Things I Have Hidden From: Moths (album) Label:  Self Released Out:  Now

Track:  Worth Your Time From: Lost Generation (album) Label:  Self Released Out:  Now

Parker Longbough style deep vocals, meets Buddy Holly plucked melodies, all wrapped up in the brilliance of the Nap Eyes / Big Thief lo fi laconic…absolutely everything to love about this sound!

Track:  Left Me Behind From: Box of Life (album) Label:  Self Released Out:  Now

Twee ‘Mummycore’ 4-some from London that could and perhaps should, be considered a gimmick…if it was not for the fact that there is absolutely no way you are ever going to get this track out of your head once you have listened to it a few times !!!

Track:  Mellodrama From: Mellodrama (album) Label:  Self Released Out:  Now

Bit of a mystery musical concept to me as there does not appear to be much of any sort of info about them on the net. However, that matters not, when they produce bouncing, Beach House meets High Sunn sun dappled jangle like this.

Lovingly recorded on a Tascam MF-P01 to give a vintage ‘tapey’ feel to slightly fuzzed melodies of the guitars and the Amanda Palmer style battered piano…Almost shy in vocal delivery and general under-production, which add to the whole vintage sense of cool.

Track:  Loveless From: Loveless (single) Label:  Self Released Out:  Now

After a 6 years hiatus, 2 am Orchestra have suddenly re-emerged. Imagine early Keene style swirling falsetto vocals with a jangled guitar ambience replacing the piano and you are just about in the right ballpark for their beautiful dream-pop aesthetic.

Track:  Awkward Girl From: Don’t Everybody Thank Me At Once (EP) Label:  Skate Shack Records Out:  Now

Pavement style jangle meets any number of mid 2000s UK The Fratelli’s style bands to provide simplicity of power-pop in the shape of unshakeable ear worms!